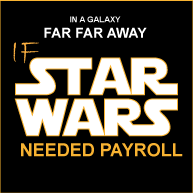 With the launch of the new Star Wars film we thought we’d take a light hearted look at how all things payroll might have panned out in a galaxy far far away.

1) Galactic Pensions – As Wookiees live hundreds of years auto enrolment was proving to be a real headache for the rebel alliance. Wookiees – Need Advice?

2) Payroll Headaches – With 1.7 million people working on the Death Star the payroll run needed to be smooth. Sorting out the payroll post destruction was a major headache for the Empire. Vader – Who should you call?

3) Expenses – Heads were turned when Han Solo presented his £3.2million business mileage claim for the 39.12 light year Kessel run in the Millenium Falcon. The extra 5p per mile claim for the Wookiee was dismissed on the part that he was not human.

5) National Living Wage – The announcement on Alderaan of a rise in the National Living Wage, to 7.20 Galactic Credits, proved to be short-lived. The next day the Death Star blew it up. The good news for the Rebel Alliance payroll team was that they didn’t need to amend the payroll run that month.

7) Shared parental Leave – Grandparents! – 900 year old Yoda was not looking forward to the Galactic Chancellors plans for Shared Parental Leave (SPL) and pay to be extended to one nominated working grandparent. Parental leave pay, currently 139.58 Galactic credits a week or 90% of average weekly earnings, whichever is lower, didn’t even cover the 4.5 light year round trip to pick up the grandchildren.

9) Auto Enrolment – The Rebel Alliance thought it was a no brainer using small in size but wise and powerful Yoda for their Auto Enrolment support. However, after taking over 800 years to stage, the rebel alliance finally opted out after hearing he had chosen ‘Vader Pensions’ as their preferred supplier. Jedi master. Pensions idiot.

10) PAYE Changes : Payrolling – Under the changes to Galactic PAYE regulations, payrolling – namely collecting tax on benefits in real time (a bit like warp speed) – came into Force from the 33rd century Tax Year. So for P11Ds (not a droid) due for completion, benefits such as medical insurance for light saber injury, Stormtrooper uniform cleaning, and company TIE fighters will be subject to tax through the Galactic payroll. With a K tax code Darth Vader was an immediate fan.

If you’re suffering from Galactic payroll problems then contact the IRIS FMP team. Regrettably the force is not strong with us, so you’ll have to use phone or email.