For as long as people have had an entrepreneurial spirit, there has been a need for payroll. Since ancient times, the employer/employee relationship has been one of the pillars of growing civilizations. Travel back 5,000 years to Mesopotamia and you would have found ancient payroll departments, writing out payslips on clay tablets just like this one: 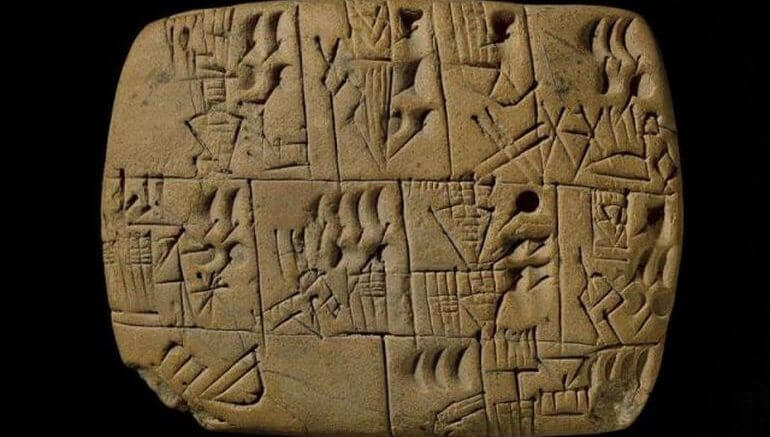 Credit: Trustees of the British Museum

5,000 years ago, the people living in the city of Uruk (now modern day Iraq), were some of the first humans to live in what we now think of as urban communities. With a civilization more complex than simple tribes of hunter-gatherers, the people of Mesopotamia began to develop agriculture and a written language. Their primitive form of writing was a picture language called cuneiform.

On this tablet we can see a human head eating from a bowl. This means “ration”, and a conical vessel, meaning “beer”. Around these pictures are scratches that record the amount of beer due to be paid to a particular worker.

Paying people in beer was not uncommon in the ancient world. In Egypt, back in the 25th century BC, up to 5 litres of beer a day was paid to the labourers working on the Great Pyramid.

In addition to getting you drunk, ancient beer was thought to have a number of health benefits for the thirsty worker. A 2,000 year old Nubian beer, for example, was laced with the antibiotic tetracycline.

Even in an economy without currency as we know it, employers were still able to pay workers. Today, we still use non-financial means of rewarding staff in the form of incentives, days off and benefits. It seems that then as now, money isn’t everything. Businesses offer holiday pay, sick pay, gym membership and other bonuses that are deemed just as important to prospective new employees as their annual income. As we make our means of employee compensation more complex, payroll systems must become more dynamic. Today, payroll departments use all the advantages of modern technology to pay employees on time, every time. With advanced means of transferring funds and organising complex pay runs, businesses are able to keep their staff happy and rewarded no matter where in the world they are.