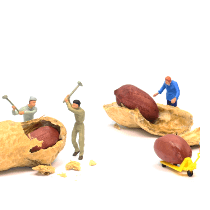 In the first of this two blog series, Neil Lagden, Head of IRIS FMP Payroll Services, looks at the National Minimum Wage and the likely impact on business, regardless of size.

Following George Osborne’s first post-election budget, businesses everywhere have been questioning the arrival of the National Living Wage. This has introduced new challenges for businesses, especially with the National Minimum Wage which is also set to rise, alongside the general trend towards higher wages for all employees..

The focus on improving pay is a key government strategy and certainly not an issue that any organisation can afford to ignore. HMRC is increasingly determined to improve compliance, and The Department for Business, Innovation and Skills is naming and shaming those businesses that have failed to pay their workers the National Minimum Wage.  Since October 2013, 285 employers have been named and shamed, with total payment arrears of over £788,000 and penalties in excess of £325,000.¹

However, this announcement comes at a time when companies were already forecasting a 3% annual wage increase in 2015, according to a Salary Trends survey by ECA International. The pressure is on companies to analyse the potential costs and assess the options for employing younger staff, reconsider flexible and part time working, even apprenticeships.

As the wages debate heats up, the role of payroll has never been more important.

Organisations were already considering the implications of the new minimum wage (NMW), due to come into play in October 2015, when the Chancellor changed the game by announcing the introduction of the Living Wage for all employees under 25. Now businesses need to understand the bottom line costs of wages rising not just 20 pence to £6.70 per hour, but actually up 70 pence to the £7.20 per hour Living Wage.

But what does it mean to businesses across the board, and to the already overburdened payroll departments?

While some businesses are actively looking at offering higher wages in order to boost employee retention, others are less positive.  Some smaller organisations in particular are already struggling with the additional costs associated with Shared Parental Leave (SPL) and Auto-Enrolment (AE), and fear they will not be able to administer and afford the change.

There is also some confusion regarding terminology and timing. The existing minimum wage for those over 21 is £6.50 per hour, with the new compulsory living wage affecting workers over 25. Combined with this, companies now have to consider the minimum wage, (official) living wage, (new) living wage, and London living wage – with different rates and relating to different age groups.

It is clearly essential that organisations quickly get a handle on the bottom line implications of the changing government policy. Payroll support to deal with this change is essential.