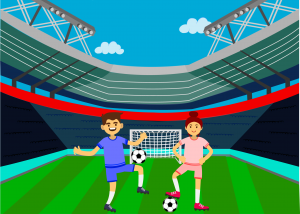 There’ll be no need for a Gender Pay Gap report to be produced at Lewes Football Club any time soon as they have become the first in the UK to pay their men’s and women’s football teams the same amount. Pay Inequality 0 : 1 Pay Equality!

Since the 6th April 2017, it has been the law that employers with 250 employees or more must publish calculations that show the pay gap between their male and female employees. Gender pay reporting considers all men and women, and highlights discrimination based solely on gender.

The move by the club will also ensure the same commitment to equality in coaching staff, equipment and facilities provided, and forms part of Lewes FC’s ‘Equality FC’ campaign, funded through the club, donors and sponsors.

Gender pay reporting however is slightly different to equal pay, as equal pay looks at the differences between men and women who do the same job and how this is reflected in their pay.

New gender pay reporting regulations came into force in April 2017 – here’s what you need to know.

These new Gender Payroll Regulations mean that within 12 months of the start date, companies with 250 or more employees must have published six calculations to their website and a government site. These calculations are:

The average gender pay gap as a mean average.

The average gender pay gap as a median average.

The average bonus gender pay gap as a mean average.

The average bonus gender pay gap as a median average.

The proportion of male and female employees when divided into four groups order from lowest to highest pay.

Alongside these calculations, a written statement confirming these figures should be released by an appropriate individual, such as a Chief Executive, Director etc. A narrative can also be provided with these calculations, if desired. This can include specifications on any circumstances that may have led to the figures as they are, and any action being taken to address and adjust the figures.

What should employers do?

As an employer, it’s your responsibility to have clear and consistent records concerning the pay of your employees. These need to show salary information across roles and genders in order to provide effective reports. Not only do you need to report on the salaries of your employees, according to their gender, but you also need to consider any bonuses that may have been paid out, including how much and to whom. This information is also required under the new gender payroll regulations.