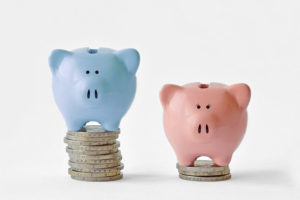 Today is Equal Pay Day, the day that symbolises how far into the year women must work to earn what men earned in the previous year. The day originated in 1996 as a public awareness event to highlight the gap between men’s and women’s wages.

Our recent International Women’s Day blog illustrates gender equality in the world place around the world, and now we’re focussing in more on the pay gap.

In the UK, companies that employ over 250 people must report on their gender pay gap. This has been compulsory since 2017, however this year, with the Covid-19 global pandemic, the government announced last week that reporting has been suspended this year.

However, the pay gap still exists around the world, and we’ve broken down how it looks in the UK.

What do people think about the pay gap

According to a survey by Tiger Recruitment of over 2,000 UK employees, 19% believe their employer doesn’t treat genders the same when it comes to pay. Shockingly, 32% say they aren’t sure if there is equal treatment.

40% of the survey responders said their organisation isn’t transparent about how pay levels are set. Women are more sceptical than their male counterparts with 21% saying they believe genders are treated unequally, compared to 13% of men.

The age of those responding to the survey also played a part. Older workers were most likely to say that they don’t think genders are paid equally. 47% of those over 55 believe their employer treats genders equally compared to 60% of those aged 16 to 24.

Gender pay around the UK

Research by Adzuna has looked at how the gender pay gap is looking around the UK. Aberdeen has the widest pay gap with the average man earning £40,978 compared to average female earnings of £26,232. That’s a gap of 56%. Norwich and Cambridge make up second and third place with 55% and 49% respectively. Both Aberdeen and Cambridge have seen increases in their gender pay gaps since the 2019 report.

Also in the top 10 places of the highest gender pay gaps are:

There are some more favourable places to work though. The top 10 UK locations with the lowest gender pay gap are:

How it differs per industry

It’s been reported that women work for free for an average of 63 days of the year in the UK due to the gender pay gap. This varies per industry though, with women in the financial and insurance industry working around 123 days for ‘free’.

Education came in second place with 93 days a year. Despite education roles being dominated by women, with three-quarters of teachers being female, the gender pay gap in the sector is 25.4%.

According to the research, the lowest industry for women working days for ‘free’ each year is water supply, sewage, and waste management, with 14 days.

According to the TUC, it will take another 50 years to close the gender pay gap. The 2019 gender pay report showed that 78% of the biggest companies in Britain reported a gap in favour of men meaning there’s definitely still a way to go for gender parity.

By choosing an experienced and compliant outsourced payroll provider, you will have access to gender pay statistics quickly, easily and frequently.