The Equal Pay Act was introduced 45 years ago, yet women still 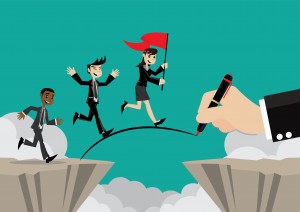 earn less than men in Britain today. The gap in pay between men and women remains the most highlighted example of inequality for women.

New for employers in 2017 The Equality Act 2010 (Gender Pay Gap Information) Regulations compels companies with 250 or more employees to publish statutory calculations every year showing how large the pay gap is between their male and female employees.

There are many reasons why the pay gap exists; ingrained discrimination, the dominance of men in the best paid positions, unequal caring responsibilities.

The gender pay gap refers to the difference in average pay between men and woman, which the Office for National Statistics works out using median hourly earnings figures for UK employees.
Gender pay reporting is different to equal pay

Equal pay deals with the pay differences between men and women who carry out the same jobs, similar jobs or work of equal value. It is unlawful to pay people unequally because they are a man or a woman.

The gender pay gap shows the difference in the average pay between all men and women in a workforce. If a workforce has a particularly high gender pay gap, this can indicate there may several issues to deal with, and the individual calculations may help to identify what those issues are.

What are employers expected to publish online?

Where will these reports be published?

The reports must be published annually on the company’s own website and a designated Government website. There will be no sanctions for non-compliance per se, however the Government has said it will highlight and identify those publishing full and explanatory reports.

What is required by employers

It is shocking that in 2017 that we even have the issue of pay inequality. However, being paid less as a woman for doing work which is of equal value and that demands equal skill is still a major issue across the UK.

It is as important for men to be vocal on this issue as women confronting issues around work-life balance and in stamping out the stigma around asking for change. Gender pay reporting could be the start to bridging that gap.