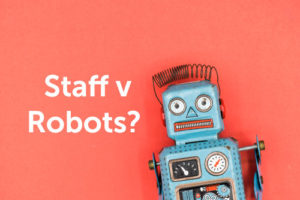 The explosion of minimum wage employees in the hospitality and personal service occupations, including retail cashiers and receptionists, has meant cheap labour has replaced the need for automation. But there is a tipping point when the cost outweighs the benefit. Could this come when the minimum wage rate increases to £8.50 in 2020? (from the £6.70 rate paid in 2015)

The Institutes analysis has revealed that beyond some point, yet to be determined, a higher minimum wage will have adverse consequences for employers, leading to strategic changes to the business in terms of machinery and computers to replace actual people.

Think that won’t happen? Think again. You’ve only got to look at the supermarkets, who have replaced the check-out team with banks of automated tills overseen by a single till supervisor.

Payroll has an increasingly important strategic part to play in business.  Understanding the number and percentage of employees employed on minimum wage can help determine the tipping point for change. Combined with an analysis of ‘routine task intensity’ (RTI) of each occupation HR teams can determine the make-up of a business going forward, critical to competitiveness and business success.

Minimum Wage – no excuse for business

In an ever more challenging payroll landscape it’s still amazing that companies still haven’t got a grip on minimum wages, with further companies named and shamed by the HMRC in December 2017, including Sports Direct and Primark. Businesses with good payroll software should easily report on minimum wage, and payroll outsourcing companies should easily be able produce those reports on request.