Where next for the Gig economy? With conflicting rulings affecting Deliveroo and Uber over the last couple of weeks, I’m a little confused.

Deliveroo this week have claimed what they believe to be a historic victory for the gig economy, after the Central Arbitration Committee ruled in favour of the company after a test case brought by union the IWGB.

In this case the Committee ruled that Deliveroo riders were self-employed, effectively denying them the right to holiday pay, minimum wage and pensions contributions.

This comes hot on the heels, however, of Uber’s Tribunal appeal against drivers’ rights, in which the taxi hailing app firm lost against the claim that its drivers should be treated as workers rather than self-employed. 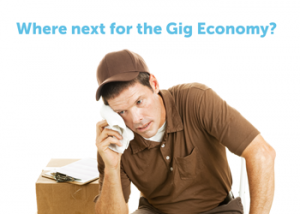 There was further bad press for the gig economy as a cleaner from app based cleaning company Handy, was fined £25 for being ill, a practice which is gathering momentum as a standard practice in the gig economy. The Guardian earlier in the year reported Parcelforce charging their couriers up to £250 a day if they are off sick.

In the gig economy, instead of a regular wage, workers get paid for each job.

Fans of the gig economy will argue that flexible hours, the ability to balance work with other commitments and putting control over the hours you want to work, make this employment attractive. Those against say it’s takes employment down to a base level – without rights or in-work benefits. For many it’s seen as negative step further along from Zero hours contracts.

For payroll and HR people it just means the mix within employment continues to get more complex, and the need to be fully in control with all aspects of HR and payroll. Without doubt it raises pay, rewards and benefits to a new tactical and strategic level. Having the right tools and expertise in house continues to challenge companies.