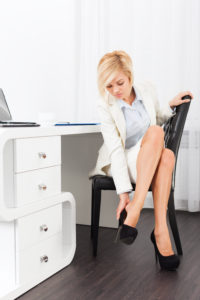 Many companies and organisations operate dress codes, ranging from uniforms for hospital staff to corporate business suits. However, recently such codes have been hitting the headlines for all the wrong reasons.

There have been several high-profile incidents, including the case of an office worker who was sent home for not wearing high heels. Tattoos and piercings are also increasingly fraught issues in many workplaces.

As a leading personnel software company, IRIS FMP keeps a close eye on issues affecting HR teams, so we are aware that dress codes can be a minefield. Here we look at how to ensure that, if you have a code, it avoids the risk of discrimination.

Reasons for dress codes vary depending on the organisation, but health and safety is one key area. For instance, healthcare workers and operators of machinery may be required not to wear jewellery, and kitchen staff to cover their hair. Another frequent objective is to promote a corporate image, making sure that the way staff are dressed gives the right impression to clients and members of the public.

Standards of dress are likely to change over time, but if a code is being altered, or introduced for the first time, it is helpful to consult with staff to make sure it suits them as well as the organisation. Quite small alterations to a policy may ensure that everyone is happy. When drawing up dress codes, companies also need to allow for reasonable adjustments which may be needed for staff with disabilities.

Once a dress code has been agreed, HR teams need to ensure it is clearly communicated, so that staff know exactly what is and is not allowed and misunderstandings are avoided. It is also advisable to include information about whether there are likely to be any differences in requirements at certain times, for instance lighter clothes in summer, “dress down Fridays” or special fundraising days for charity.

Guidance from Acas indicates that the specific standards for male and female dress can be different in a workplace. For instance, where business dress is required, a man may be expected to wear a tie. However, Acas advises that employers need to avoid discrimination and ensure the rules apply equally to both genders.

One recent controversy involved a temporary office receptionist employed via an agency, who was sent home after turning up to work in smart flat shoes rather than high heels. The woman concerned, Nicola Thorp, started up a petition against companies requiring women to wear high-heeled shoes, which received more than 150,000 signatures and has led to a Parliamentary inquiry.

In another recent case, a waitress was awarded over £3,500 by a discrimination tribunal after her employer told her to wear a skirt and make-up and be “easy on the eye” for customers.

Religious dress has also been in the spotlight recently, with some cases at the European court involving Muslim women who were told to remove headscarves. Following contradictory rulings, the position is unclear at present, however, Acas advises companies to be cautious about restrictions on religious dress to avoid discrimination. Employers should also ensure that any rules are based on genuine safety or business requirements.

Over the years there has been a move towards greater informality in many organisations across the UK. Rather than just having a policy of “dress down” Fridays, staff in many companies now dress more informally every day.

Despite this general relaxation of strict dress rules, many companies and organisations are still opposed to tattoos and piercings. In one recent instance, a woman was offered a position as a retail merchandiser over the phone, but then the job offer was withdrawn after her prospective employers learned that she had a tattoo on her hand.

Many companies argue they have a good business case to require employees to cover up tattoos and remove piercings while at work. For instance, if you are running a high-end restaurant or an upmarket business or financial services firm, you may feel that body art does not fit with the company’s image.

However, attitudes are changing, since a high proportion of the population now has tattoos, especially members of younger generations. It is estimated that a fifth of people in the UK have at least one tattoo, with around a tenth of us having piercings, not counting earrings. Against this background, more employers may have to shift their view over the coming years.

At present, if you do have a policy against tattoos, it is advisable to state the policy clearly and make sure you have sound business reasons. If you are introducing a policy on this, you need to think about how it will affect existing staff. Any religious reasons for piercings or tattoos also need to be taken into account.

For more information about Amity mobile HR software and Teamspirit and how they can help your organisations, click to download our product brochures.